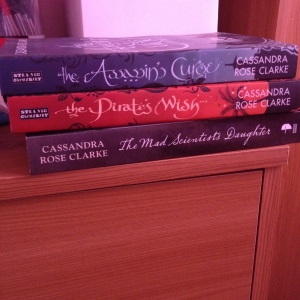 (I’ll only give you a synopsis of the first one incase of spoilers!)

Ananna of the Tanarau abandons ship when her parents try to marry her off to another pirate clan. But that only prompts the scorned clan to send an assassin after her. When Ananna faces him down one night, armed with magic she doesn’t really know how to use, she accidentally activates a curse binding them together.
To break the spell, Ananna and the assassin must complete three impossible tasks–all while grappling with evil wizards, floating islands, haughty manticores, runaway nobility, strange magic…and the growing romantic tension between them.

I had seen this duo floating around on Goodreads and booktube and thought they sounded interesting – I’ve never seen any pirate books within the Young Adult genre!

But I kept seeing on Booktube videos of people saying that the publishing company Strange Chemistry was going out of business so I thought it was best to snatch these books up before they weren’t available anymore!

“Cat, this is Finn. He’s going to be your tutor.”
Finn looks and acts human, though he has no desire to be. He was programmed to assist his owners, and performs his duties to perfection. A billion-dollar construct, his primary task is now to tutor Cat. As she grows into a beautiful young woman, Finn is her guardian, her constant companion…and more. But when the government grants rights to the ever-increasing robot population, however, Finn struggles to find his place in the world, and in Cat’s heart.

This is another one I’ve seen floating around on Goodreads but that’s the only place I’ve heard of the book! I think the premise sounds AWESOME and I really want to get to it soon!