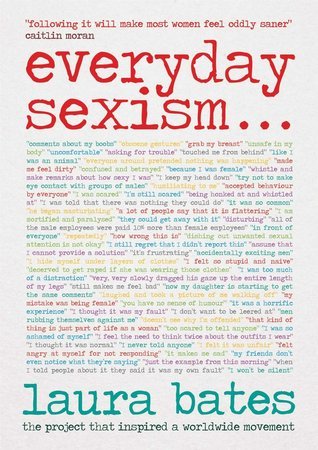 “Women are standing up and #shoutingback. In a culture that’s driven by social media, for the first time women are using this online space (@EverydaySexism www.everydaysexism.com) to come together, share their stories and encourage a new generation to recognise the problems that women face. This book is a call to arms in a new wave of feminism and it proves sexism is endemic – socially, politically and economically. But women won’t stand for it. The Everyday Sexism Project is grounded in reality; packed with substance, validity and integrity it shows that women will no longer tolerate a society that ignores the dangers and endless effects of sexism.

In 2012 after being sexually harassed on London public transport Laura Bates, a young journalist, started a project called Everyday Sexism to collect stories for a piece she was writing on the issue. Astounded by the response she received and the wide range of stories that came pouring in from all over the world, she quickly realised that the situation was far worse than she’d initially thought. Enough was enough. From being leered at and wolf-whistled on the street, to aggravation in the work place and serious sexual assault, it was clear that sexism had been normalised. Bates decided it was time for change.”

After hearing about Bates’ project on twitter, I knew I had to pick this up.

For an additional A Level, I’m doing an Extended Project Qualification about feminism and “is it really needed in the 21st century.”

Bates includes so many tweets and messages she has received throughout the project. She also tackles a range of topics from celebrity culture to politics to pregnancy to just walking down the street.

This book doesn’t just talk about women’s struggles she includes sexism that men are affected by too. And from all ages!

Frankly I think, especially in 2014, attitudes need to change. I gave this book 5 stars because this absolutely captured me. The feelings of shock and fear often happened to me while reading this book. Things may seem bad or not even bad at all but they are. Just read some of these people’s accounts in this book.

I highly, highly recommend this book for everyone.