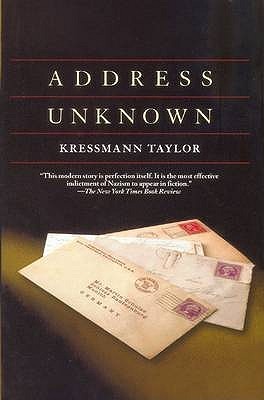 “When it first appeared in Story magazine in 1938, Address Unknownbecame an immediate social phenomenon and literary sensation. Published in book form a year later and banned in Nazi Germany, it garnered high praise in the United States and much of Europe.

Francisco and his former business partner, who has returned to Germany, Address Unknown is a haunting tale of enormous and enduring impact.”

This is a historical epistolary novella that follows two friends’ communication with the back drop of the rise of Hitler and Nazi Germany.

It’s only 50 pages long. We read this in creative writing earlier this month and I really enjoyed it.

In such a small amount of time Taylor establishes the relationship between the two characters so perfectly, you can feel the history of their friendship and business partnership coming off the page.

It’s so quick to read, especially as the novella is all told in letters between the two characters. You could read it in just under an hour.

Having been published in 1939 you can imagine the controversy this novella caused.

If you like historical fiction and want something super quick to read then I highly recommend this novella!