I had so much fun! Everybody was so friendly and lovely and I had a fabulous time!

I also bought a few books…

I have a TBR to last me a lifetime hahaha

However, a couple weeks ago, I took a mini trip to Foyles during one of my breaks at college where I picked up:

The War of the Worlds – H.G Wells
Grimms’ Fairy Tales – The Brothers Grimm

Now on to today’s haul! 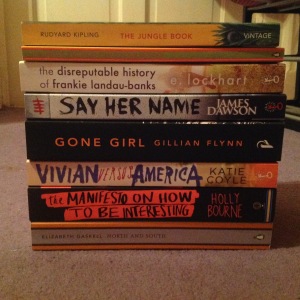 Our first stop was in Foyles! I love Foyles. It’s like a palace.

In Foyles I got:

The Jungle Book, I got because 1) the Disney film is fab and 2) there will be TWO adaptations of this within the foreseeable future!

Both lineups sound AWESOME so I want to get on that. I’ve also had a kick for children’s classics lately!

I’m fairly certain Frankie Landau Banks was meant to be published at the end of November?! As soon as I saw it I was like YANK. MINE.

Then we moved on to Waterstones Piccadilly, which is another bookstore that I love, where I bought:

Vivian Versus America was the only one I had a reason for purchasing! I’m about to go on a very long book ban and I have the first one but since it’s only a duo I thought I’d get it so I can marathon!

The others I’ve been interested in for a long time and thought it was about time I owned them!

After I left the meet up, I went to Hatchards to find where it was. I had heard a lot about it and had never been.
THEIR CLASSICS SECTION IS SO BEAUTIFUL.
So I bought North and South – Elizabeth Gaskell

And then I ran out of money and went home!

I had such a really fun day and now I have plenty to read which I’m looking forward to!

Have you read any of these? Let me know what you thought!

Tagged as: book haul, gone girl, north and south, say her name, the disreputable history of frankie landau banks, the island of doctor moreau, the jungle book, the manifesto on how to be interesting, vivian versus america