As I mentioned in my Friday Reads earlier in the month the books I read this month were influenced by the #ReadWomen campaign on tumblr! But I ended up forgetting to submit to the giveaway but I did read some really great female authors this month! 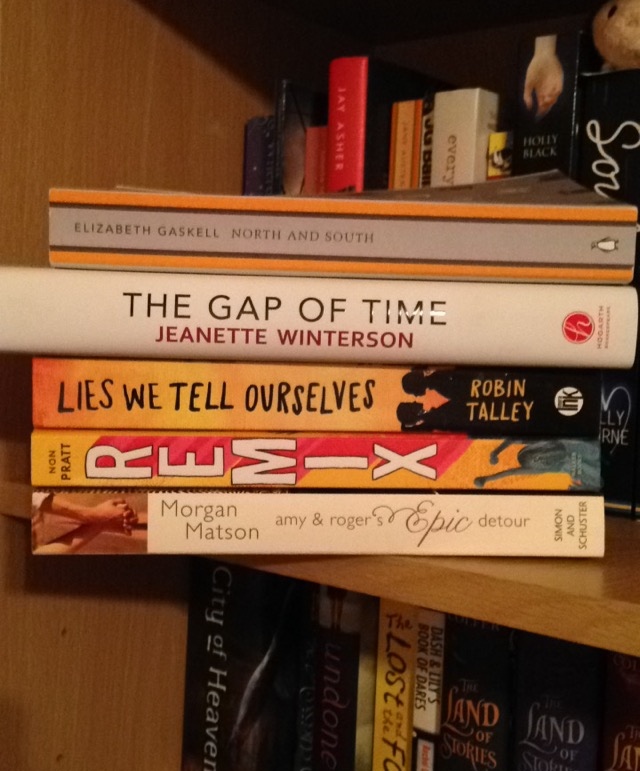 At the start of the month I was in the mood for a classic so I picked up North and South! That’s pretty much it, really. Elizabeth Gaskell is a very popular author and I felt it was time to give one of her books a go.
North and South follows Margaret Hale as she moves from the South to the North because her dad felt he could no longer work with the church. As if he had an epiphany one day, thinking “… you could be wrong on that.”
The main theme is this book is adjustment to different classes and different ways of life.
Margaret was a well constructed character, especially in the beginning. The book had some really good plot twists, when it eventually got to them.
But other than that, I was bored. I skimmed the last 100 pages or so. The relationship didn’t interest me at all and unfortunately that seems to be the book’s main sell.

The Gap of Time – Jeanette Winterson

The Gap of Time is the first novel in the Hogarth Shakespeare series. It’s an adaptation of The Winter’s Tale. And I enjoyed it so much, it got it’s own review which you can click to HERE!

Lies We Tell Ourselves – Robin Talley

Lies We Tell Ourselves is my favourite book of this month! It’s a historical fiction set in the late 1950’s situated around the first black students entering a white high school.
I really loved this one – this book got it’s own review also which you can view HERE!

Remix is a UKYA novel following Kaz and Ruby as they attend a weekend long music festival. Both have had boyfriend troubles that they want to forget about and just have a stress free weekend that’s all about the music. But of course this doesn’t happen.
It’s a book about friendship and what it means to have/be a best friend and I loved it. I could feel the love these two characters had for each other coming off the page. I’m protective over my friends so I definitely identified with Ruby on that.
I absolutely flew through this. If you’re looking for a highly entertaining book set in the UK about female friendships then I definitely recommend Remix.

This is a YA contemporary novel set on a road trip. Amy is moving across the country with her mother and her mother needs Amy to bring the car from California to Connecticut. So Amy’s mother enlists the help of their neighbour Roger who is also embarking on a cross country trip.
This was a very cute novel but, boy, it packs an emotional punch. It deals very well with the theme of dealing with loss and recovery, whether that be loss of a partner (Roger) or loss of a parent (Amy).
A few pages in this book replicated Amy’s scrapbook, which I LOVED. I read somewhere, maybe Goodreads, that this book was inspired by Matson’s own road trip. I think majority of the photography that’s in the book was taken by Matson herself which made me feel all that more connected to her as a writer.
I highly recommend this book if you’re into contemporaries and/or travelling. Especially if you’re into travelling in the US as there’s lots to learn about the different states Amy and Roger visit.

Thanks for reading and happy new year!

Tagged as: amy and roger's epic detour, book wrap up, december wrap up, lies we tell ourselves, north and south, remix, the gap of time