All The Rage – Courtney Summers 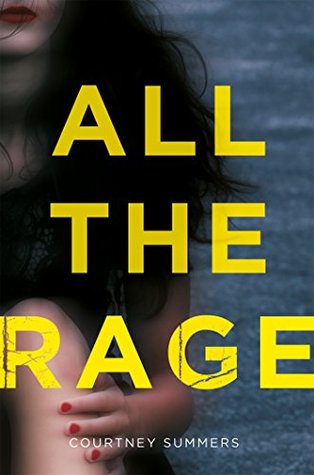 “”My dad used to say makeup was a shallow girl’s sport, but it’s not. It’s armour.”
Kellan Turner is not the golden boy everyone thinks he is and Romy Grey knows that for a fact. But when she speaks up, she is branded a liar. Telling the truth has cost her everything, because no one wants to believe a girl from the wrong side of town.
But when news of Kellan assaulting another girl gets out, the cost of staying silent might be more than Romy can bear. With a shocking conclusion and writing that will absolutely knock you out, All The Rage examines the shame and silence inflicted upon young women in a culture that refuses to protect them.”

All The Rage is an incredibly, powerful book. It’s a look on rape culture that I don’t hear about often. The ‘what happens next’. Set in a small town in America, the book deals with how one girl has been portrayed by the community. God forbid anyone disrespects the sheriff’s son.

This is the first book I have read by Courtney Summers which I first heard about on OnceUponABookcase. Having read Asking For It by Louise O’Neill about a month before reading Jo’s review, I was instantly intrigued. And I can definitely see why people like to put both books in the same bubble.

Courtney Summers’ writing style is beautiful and haunting. Because of how real it is. It makes me angry and sad that there are people all across the world who are in the same position as Romy. Because she wore short clothing. Because she fancied him. Every excuse under the sun to justify why she was asking to be raped. Obviously. And while we never meet the sheriff’s son, Kellan, for me his presence is always there. Cause and effect. And I think this is why the book never really feels “resolved” as such. Because what he did is always there with Romy. The novel also shows Romy’s relationships with her mum and stepdad and the people she works with. Which was interesting to explore as the book is told from Romy’s perspective.

All The Rage is a brilliant novel and really makes you think about how actions can effect people.

Tagged as: all the rage, book review, contemporary, courtney summers