If you have been following me on Twitter and/or Instagram since the start of the year, then you will have seen that I can’t seem to stop taking trips to see In The Heights at the Kings Cross Theatre.

Last night was my 7th trip to el Barrio. From seeing the early cast members to seeing various understudies to even attending the same performance as it’s music & lyrics creator Lin-Manuel Miranda. This show continues to be vibrant & brilliant.

In The Heights is set in Washington Heights in New York and follows the ups and downs of the characters in the neighbourhood over the 4th July weekend. The music in the show explores different genres from rap to latin to salsa to slightly pop.

The music and the characters are so entertaining. With a big cast with big characters, it could be difficult for each character to get lost within the show. But each of the main characters get their moment to shine and allow moments in the show to dig deep into their back story.

The theatre has one of the best and unique stagings I’ve ever seen in a theatre. The theatre in King’s Cross was originally a platform in the station. So the stage is on top of where the railway used to sit, and the seats are on either side, like a platform. This is a fantastic set up as no one (particularly, the ensemble) is pushed into the background.

During my latest trip, I got to see the new cast. My previous trip had been the last show for many of the company members and they were definitely sent off in style. Sam Mackay continues to excel as bodega owner Usnavi. Sarah Naudi, who previously played Carla, is incredible and is by far my favourite our of the Vanessa’s I have seen. I had seen her as Vanessa a couple of times before, when she was an understudy and I’m so glad she’s full time Vanessa. Jonathan Bishop continues to be my favourite in the cast as Graffiti Pete.  Out of the new members of the cast, Stephanie Rojas as Carla & Arun Blair-Mangat as Benny were particular standouts.

I think this show came back at the right time. Having originally premiered in London at the Southwark Playhouse, the show moved to the King’s Cross Theatre October 2015. This was a perfect time for the show to start back up again, as this was around the same time Lin Manuel Miranda’s latest musical Hamilton had started it’s world domination. So, more & more people were discovering Lin Manuel Miranda’s back log.

In The Heights really does breathe new air into musical theatre. It’s a fantastic, vibrant show with an incredible company. And it’s only running in London at the King’s Cross Theatre until January 8th 2017. Don’t miss out!

You can find tickets and information at https://www.intheheightslondon.com 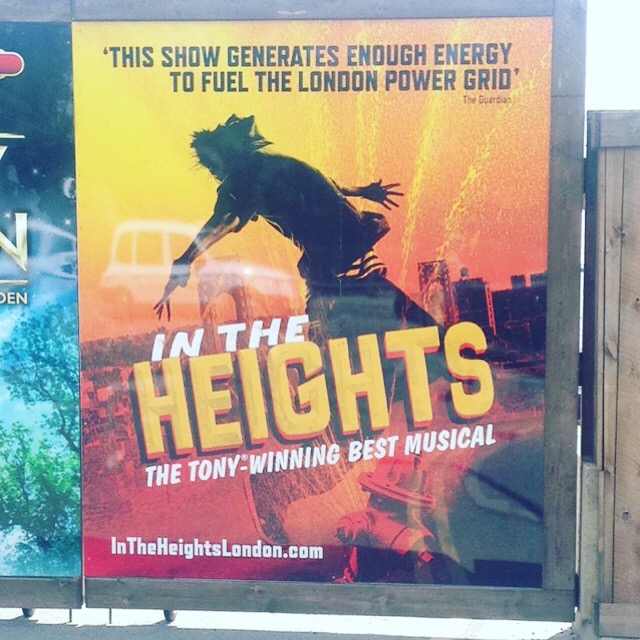