Last week, my friend Bliss and I took a trip to the National Theatre to see the Bristol Old Vic’s production of Peter Pan! I had read the book by J.M. Barrie earlier this year and was really excited about seeing how it translate onto stage.

The National Theatre is fast becoming one of my favourite places. Not only is it incredibly beautiful, there’s so much room to chill out before the show. There’s also a really nice bookshop filled with plays. And there’s also a cute cafe and a really nice pub that does the best sweet potato fries. Peter Pan was the second show I had seen here – having seen The Threepenny Opera here back in September. 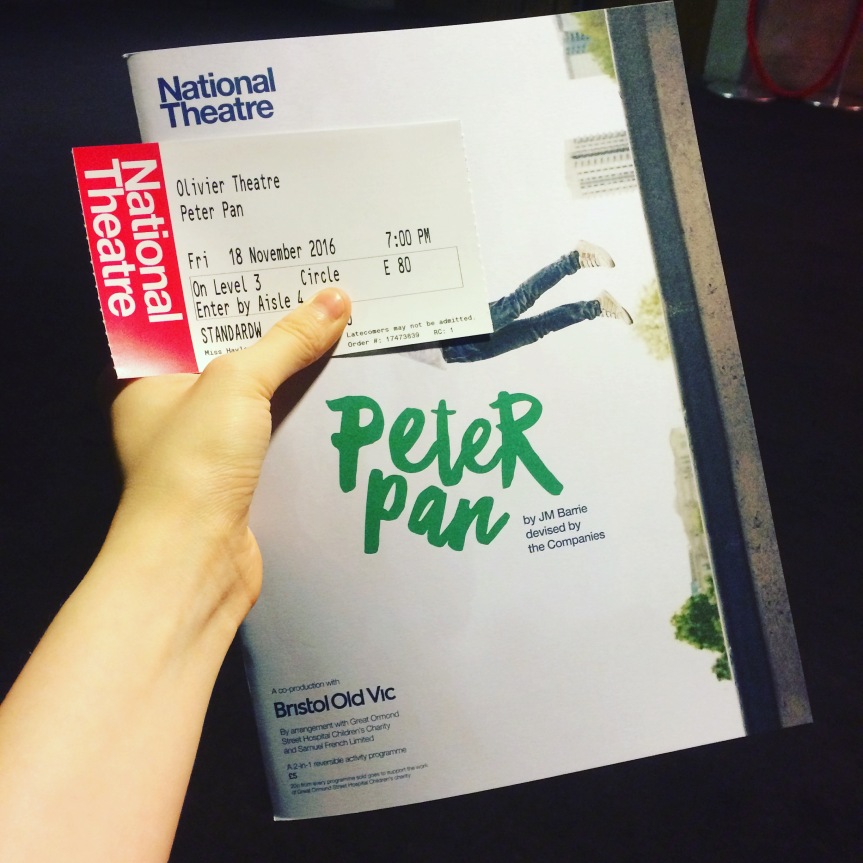 Peter Pan follows a young boy called Peter is leader of a band of Lost Boys in Neverland who refuses to grow up. One night he stumbles upon the Darlings – Wendy, John & Michael- and takes them to Neverland. If you’ve read the novel or the play, or seen the various film adaptations the storyline is still the same. And the magic of Peter Pan is still present.

First of all, this production isn’t just actors and a stage. There’s puppets. There’s aerial ropes that allow the actors to fly – or “fairy string” as Peter Pan calls it. There’s incredible moments of movement that make the non humans – like Peter’s shadow and the Wolves – move realistically. The staging was absolutely incredible, my jaw dropped when Captain Hook’s ship revolved from under the stage!

The company of actors were absolutely brilliant. Paul Hilton who plays Peter was a perfect fit. His Peter is cheeky, charming & is idolized by the Lost Boys. Madeleine Worrall who plays Wendy was equally as outstanding. Her use of voice and posture to transform between young Wendy and older Wendy was brilliantly smooth. Also have to mention Anna Francolini who took over from Sophie Thompson to play Wendy’s mum & Captain Hook when Sophie Thompson injured herself. I really liked that this production chose to double cast these two particular roles. I found the casting decision really enhanced the distaste Peter Pan has for parents.

Peter Pan is a fantastic and fun production from the Bristol Old Vic that I really enjoyed and is definitely something for all the family! They even do half price tickets for those under 18 so definitely check it out!

Peter Pan is running until 4th February 2017 in the Olivier Theatre at the National Theatre. For more information visit https://www.nationaltheatre.org.uk