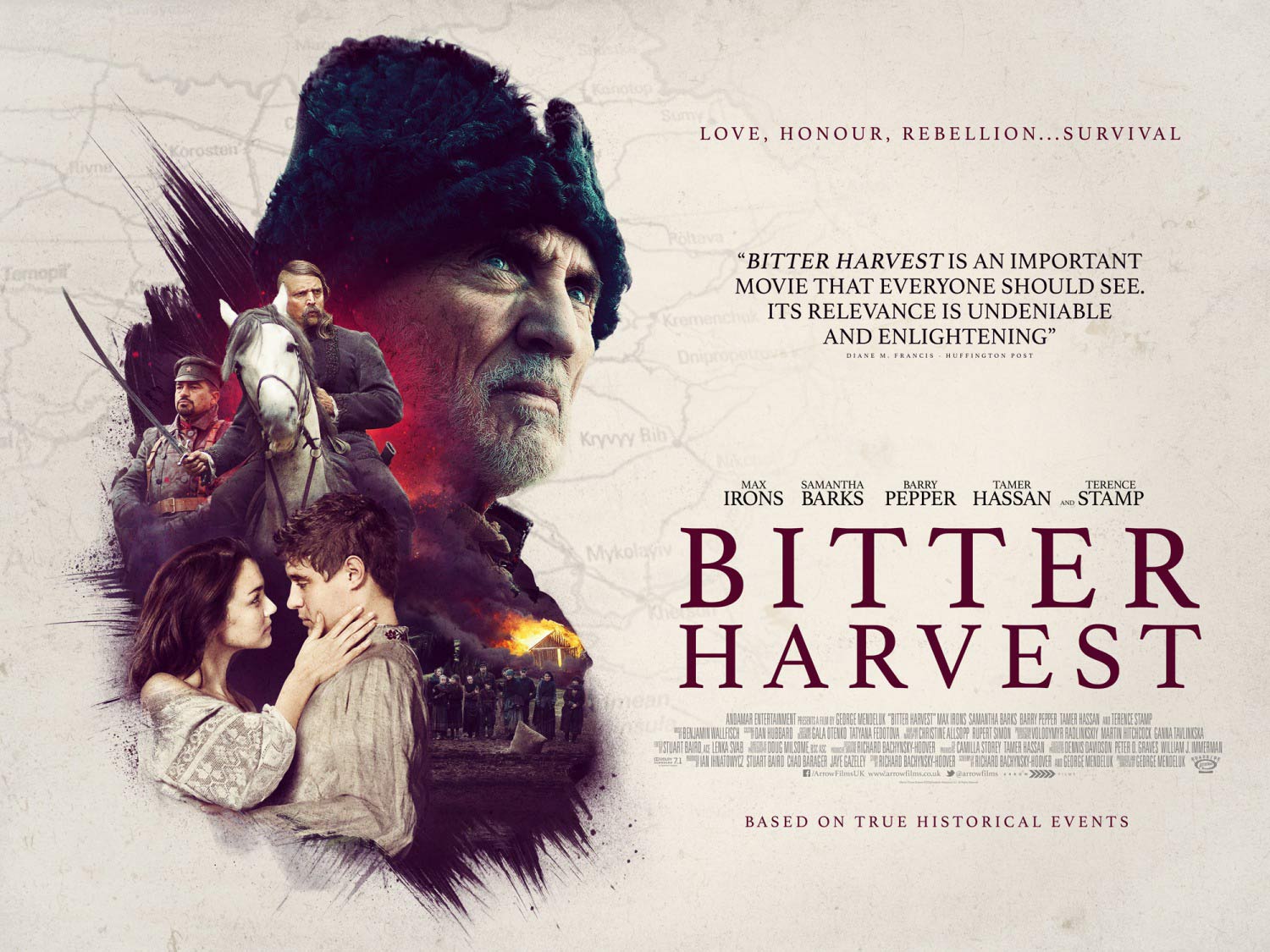 Based on true events BITTER HARVEST is a powerful story of love, honour, rebellion and survival as seen through the eyes of two young lovers caught in the ravages of Joseph Stalin’s genocidal policies against Ukraine in the 1930s. As Stalin advances the ambitions of the burgeoning Soviet Union, a young artist named Yuri (Max Irons) battles to survive famine, imprisonment and torture to save his childhood sweetheart Natalka (Samantha Barks) from the “Holodomor,” the death-by-starvation program which ultimately killed millions of Ukrainians. Against this tragic backdrop, Yuri escapes from a Soviet prison and joins the anti-Bolshevik resistance movement as he battles to reunite with Natalka and continue the fight for a free Ukraine.

I had the utmost pleasure of attending the UK Premiere of Bitter Harvest earlier this week. It’s a stunning film about a period of Ukrainian history in the early 1930s, that was kept so tightly under wraps, it was only discovered in the early 1990s. It seems so bizarre that a man-made famine that killed between 2 to 7.5 million people was purposely kept out of the media and out of mainstream history.

George Mendeluk’s film is a visually stunning film with exquisite detail. As the film went on, each shot becomes more & more darker, which represented the progression of the Holodomor. With cinematography by Douglas Milsome, every shot appears to have been chosen with great care.Because not only are you seeing close up shots of the pain Yuri & Natalka are going through, but you also get some incredibly beautiful landscapes of Ukraine.

Max Irons and Samantha Barks are absolutely incredible in this film. Considering they had never met prior to filming, I liked the chemistry that was between them, they were very well cast. I find that sometimes, in historical films, love stories are put in place as a plot device. But the romance between Yuri & Natalka never felt like that. They’re not driven apart for stupid reasons, it’s what people had to do in order to survive during that period.

The film also has fantastic support from Tamer Hassan as Sergei, one of the men in charge of the operation, and Aneurin Barnard as Yuri’s best friend Mykola. What makes this film extra special is that the film was shot in Ukraine with a mostly Ukrainian crew. Because of this, the film feels all that more authentic. It’s a truly beautiful film that I hope creates more awareness of this moment in history.

Bitter Harvest is in UK cinemas from February 24th. You can find more information on the film at http://bitterharvest.co.uk/

My friend Olivia was also at the premiere and vlogged it so check out her vlog too!