Being Busy But Still Managing to See Three Plays

And I’ve been too tired to write about them individually. April has been so unexpectedly busy for me lately. My family and I are in the midst of a complete overhaul of the house. I’ve moved bedrooms and converted our guest room into a library. I only ended up moving bedrooms because (what was our former guest room) had a better bed. And it took three hours for my dad and I to move into my former bedroom to find that it didn’t fit. So that was fun. But worked out for the best, because my new bed is way comfier than my previous one and I look like this:

As well as moving rooms, work has also been hectic and I’ve just lost the energy to be on the internet. Except to binge watch Chewing Gum. That was fantastic. But, I did manage to squeeze in three plays over the last week.

First up was Rosencrantz & Guildenstern Are Dead starring Daniel Radcliffe & Joshua McGuire at the Old Vic. Fifty years after it’s premiere, RAGAD follows two minor characters from Hamlet in their own story about chance and probability. Tom Stoppard’s play is fantastic and full of energy. The play also features scenes from Hamlet and manages to flow between the Hamlet scenes and these new scenes (which aren’t in Shakespeare’s language) brilliantly. The run at the Old Vic ends on May 6th and you can find more information at http://www.oldvictheatre.com/whats-on/2017/rosencrantz-and-guildenstern/ 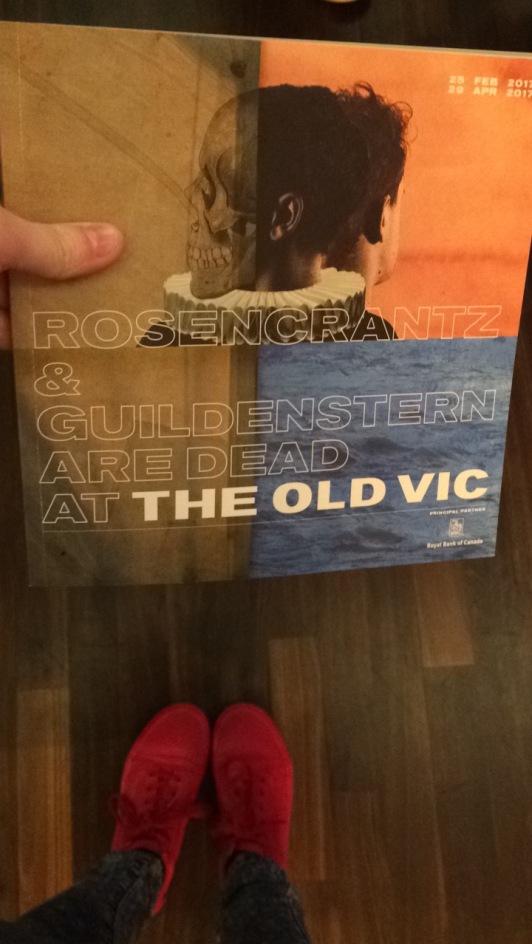 Secondly I went to see Don Juan In Soho starring David Tennant at the Wyndham’s Theatre. Using Moliere’s character of Don Juan and placing him in 2017 London, Patrick Barber has written and directed a fantastically, darkly comic play that had me burst out laughing as I was watching it. Because it’s so current, the play is filled with political references with many jabs at Trump that were particularly funny. Don Juan isn’t a particularly nice character; in fact he’s rooted in SO much privilege and misogyny that he’s blind to it which, let’s be frank, a lot of us are. Most of the play is about how he hates living in a world of hypocrisy, while at the same time contributing to that hypocrisy. It’s a fascinating play led by the ever so brilliant David Tennant, who really can do no wrong. The run at the Wyndham’s Theatre ends June 10th and you can find more information at http://www.delfontmackintosh.co.uk/tickets/don-juan-in-soho/

And lastly, I saw another Moliere play that has had new life injected into it and that is The Miser, currently playing at the Garrick Theatre. The Miser is a hard one to describe because it feels like there’s about five different storylines going on. The main plot line is a rich old man, played by Griff Rhys Jones, is trying to prevent his children from getting their hands on his money to get out of their arranged marriages. It’s incredibly funny. Majority of the main cast are made up of stand up comedians like Lee Mack, Ellie White & Katy Wix as well as actors with comedy experience like Mathew Horne & Ryan Gage. And I think this was a smart decision because the play felt like one long sitcom. There are moments throughout the show where I couldn’t tell what was improvised or not. For example, a few of the actors kept breaking character and laughing (mostly at Lee Mack). There’s lots of banter with the audience as well which was great. But I do think I definitely require a second trip.  It’s currently running until 3rd June and you can find more information at https://www.nimaxtheatres.com/garrick-theatre/the_miser

And until next time,