I have a lack of experience on flights.

I’ve only ever been on two flights prior to this trip. One going to New York last time. And one going back home to London. I don’t remember much about those flights but it’s safe to say I was probably super nervous, having never experienced flying before as well as a Delta experience.  This was definitely not the case this time. 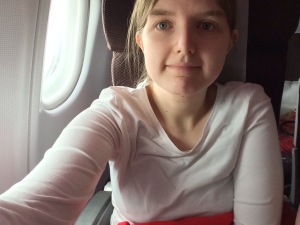 First change was the airline — we flew with Virgin Atlantic who were fantastic. Just when you thought the plane attendants couldn’t bring us more food and drink, they DID.

Secondly, I planned my movies binge about an hour before boarding the plane. Seriously, the complimentary blanket was out of the plastic and wrapped around me like a mermaid tail. My shoes were off and my headphones were on. On the flight I finally got to watch Doctor Strange and Hidden Figures. So Doctor Strange had amazing direction and special effects but I have zero clue as to what the plot was. It’s certainly quite a different role for Benedict Cumberbatch but Stephen Strange felt like a basic version of Star Lord from Guardians. Hidden Figures was an outstanding film with such an incredible storyline and an incredible cast, it’s undeniably a must see.

I will say though I had my little heart set on watching the 2017 Beauty and the Beast film but it wasn’t working on the plane, annoyingly! It just kept showing adverts over and over again. It takes a lot for one to get sick of seeing the Dreamgirls and School of Rock adverts but it happens.

On the plus side, I did get a large chunk of reading done. I’ve almost finished The State of Grace by Rachel Lucas which I’m enjoying a lot!