In which I survive my first solo outing to a Broadway show and a Broadway stage door! Based on a 70 page section of Leo Tolstoy’s War and Peace, Dave Malloy has created an immersive and truly fantastical musical theatre experience. I was sat in the last row, right at the back of the theatre and I still felt so included in the show. Right before the show starts the ensemble launch themselves into the audience, throwing pierogis at the audience. I don’t know what it is as I didn’t get one but I believe it’s some kind of snack. They,then, proceeded to tell us to “keep your shit out of the aisles” due to the cast running back and forth in the theatre. 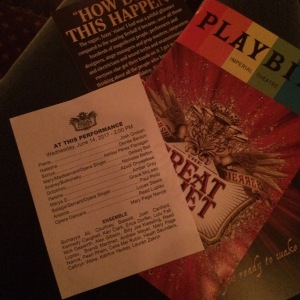 The cast is led by Denee Benton as Natasha, whose voice is just as angelic and beautiful as she is, and the brilliant Josh Groban as Pierre. They both received enormous applause when they entered the stage and at the curtain call. But for me the standouts were Amber Gray as Helene and Lucas Steele as Anatole. They have such incredible voices, Amber’s voice reminded me of Amy Winehouse. And Lucas Steele carries such stage presence, I couldn’t take my eyes off him whenever he was on stage. But overall, the cast are one of the most talented casts I’ve ever seen. They are a diverse mix of not only incredible triple threats but also musicians! 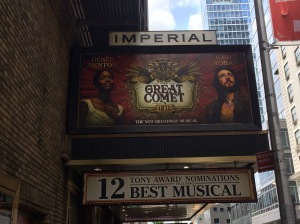 Dave Malloy’s score is one of the most varied scores I’ve ever heard with music ranging from pop to opera to rock and electronic dance music. Seriously. A full on rave happens in the middle of the show, it’s insanely good. Matched with an incredible set design by Mimi Lien, choreography by Sam Pinkleton and direction by Rachel Chavkin, it’s a wonder that this show only two Tonys out of a nominated 12. 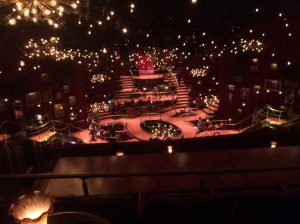 If you can’t get to New York to see this show, then be sure to check out the cast album. The score is all sung through, so it’s quite easy to pick up the plot. That being said I don’t think I would not have completely got it if I hadn’t did my research and actually read up about it. Unlike the two ladies I was sat next to who wouldn’t shut up about how much they weren’t enjoying it. But luckily for me they left at intermission and I had more legroom in their absence.

I said to myself I wasn’t going to stage door but I came out of an exit that was right next to the stage door. I bagged a barrier spot and I was also kinda stuck because of the crowd that was coming out of Great Comet and Hamilton which is next door. I did get my Playbill signed by a bunch of the ensemble, Lucas Steele and Josh Groban. I managed to get a photo with Lucas Steele and I got to tell Josh Groban he is wholesome and I got a compliment on my sunglasses in return. 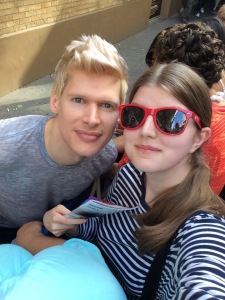 So overall a very good and stagey day indeed.