Hir by Taylor Mac is the latest production at the Bush Theatre’s newly renovated theatre. The play follows Isaac who comes home from being away in the marines to find his sister Maxine is now his non binary sibling called Max. At the same time, their mother Paige has rejected contributing to the patriarchy and has stopped doing what is expected of a housewife, including caring for her husband Arnie who recently suffered a stroke. 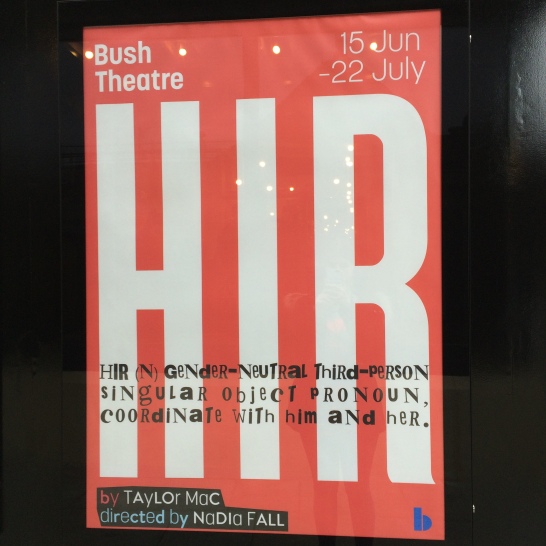 Taylor Mac creates a family dynamic that creates a fine line that balances between being very intense and being very comedic. Hir is certainly a family dynamic I haven’t seen represented on stage before. The title Hir is the middle ground between “him” and “her”, much like the character Max. What’s really interesting about this play is that the play is written by a non binary person in Taylor Mac, which stated in the author’s bio. Hir is a real lesson in and about gender as a construct and gender roles in society,  something I (as a cisgendered person – aka, the gender I was assigned at birth) want to continue learning about. One thing I really loved was how Taylor Mac’s script proposes really insightful interesting theories about trans people in pop culture – I can’t look at the Mona Lisa the same again. 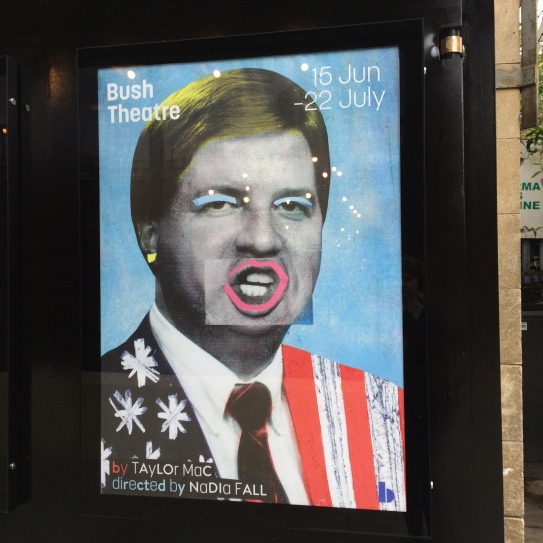 Arthur Darvill is brilliant as Isaac who spends the play struggling to come to terms with the new family dynamic. I had previously seen Arthur on stage in the musicals Once and Honeymoon In Vegas and it was wonderful to see him in something different.  Griffyn Gilligan is outstanding as Max alongside Ashley McGuire as Paige and Andy Williams, while doesn’t have a lot of lines is captivating in his stage presence, as Arnie. The stage is set right in the middle of the theatre with both blocks of seats on either side, making the audience feel part of the Connors’ family life.

I think Hir has landed at the Bush with impeccable timing in time for Pride. Hir is a unique and special play and I wish there were more like it in theatre. Theatre is a wonderful place for writers to inform and for the audience to learn and grow. Hir does this without having the subject matter shoved down your throat, which is what we need more of.

Hir at the Bush Theatre is running until 22nd July. For tickets and more information please visit https://www.bushtheatre.co.uk/event/hir/