This year has been the first year I’ve spent at London Film and Comic Con & the Young Adult Literature Convention where I have attended on more than one day! Luckily for me, Showmasters put on one of the most chilled out conventions I’ve ever been to, so I’ve never felt stressed out due to crowds, whenever I’ve attended. Previous years, I’ve only attended on the Sunday as it’s usually the quietest and you can get the best book deals.

Attending on the Friday was great as it meant I got to spend more time in the main LFCC part of the convention. The floors are filled with hundreds of stalls selling a range of merchandise from phone cases to t-shirts to Funko Pops from massive shows like Game of Thrones, The Walking Dead as well as being inclusive of the Marvel and DC Universes. It was nice to have a look around but I do wish I had saved more money so I could buy some really cool things other than budgeting for books because I really wanted an Olivia Moore Funko pop. One day, I will own one and she will stand next to my Sherlock and Matt Murdock on my bookcase.

We arrived a bit later on in the day which was quite nice because our train was emptier and there was no massive queue to join just to get inside the building. As soon as we stepped onto the second floor, I joined Elizabeth Wein’s signing queue. She signed my copies of Code Name Verity and Rose Under Fire, her two novels following two incredible young ladies fighting in WWII. Elizabeth’s latest book The Pearl Thief follows the main protagonist from Code Name Verity, Julie, as a sixteen year old girl in Scotland. Elizabeth was super lovely to talk to, I had read CNV and RUF about three/four years ago and I still feel very much connected to them.

The next signing I joined was for Juno Dawson. I absolutely devoured her first foray into historical fiction Margot & Me, which she signed for me. I’ve made it a rule to myself that I will only get books signed if I’ve actually read it and enjoyed it so I can actually talk about the book rather than standing there awkwardly.

No rest for the wicked, I dashed over to the events stage and watched my first panel of the convention, which was titled Writing What You Know. The panel was chaired by Katherine Webber, the author of Wing Jones, who I’ve seen chair a few panels and is always so full of excitement for the books and the authors she will be talking to. On the panel was Rachael Lucas, Lisa Williamson, Alex Wheatle, Hannah Witton and Lisa Heathfield. The panel discussed taking their own experiences, putting them into their books and how much of themselves are really explicit in their books. There was also talk about the similarities between writing fiction vs non fiction as Hannah is the only one of the panel to have written non fiction. 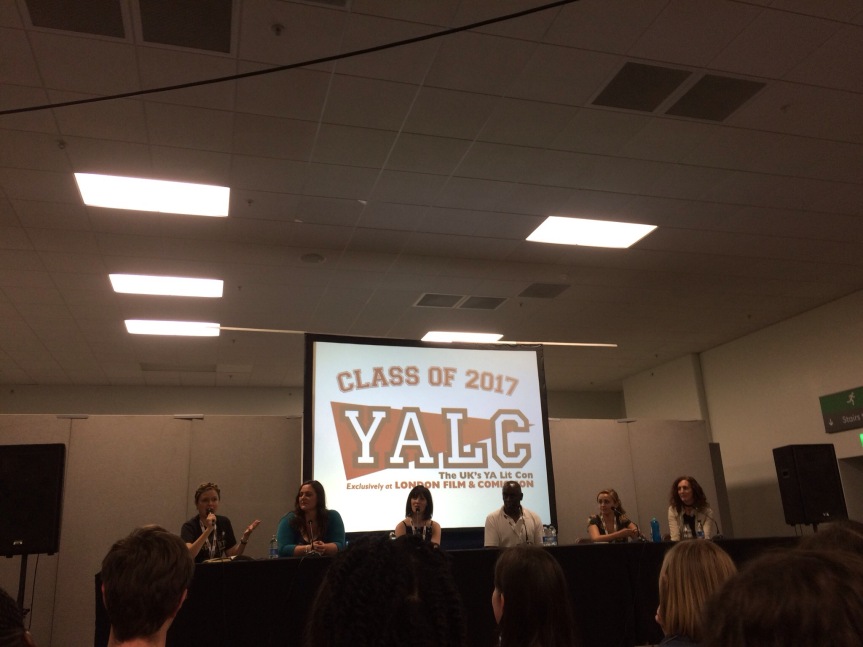 I adored Rachael Lucas’ book State of Grace, which is about a girl who is autistic. I’ve never read a book where a main character has autism and Rachael said that the book was prompted after her and her daughter were diagnosed as autistic. She also mentioned that while her book doesn’t reflect a whole community of people, she was glad that her book allows some people to see themselves in her main character Grace. After the panel I met Rachael who is so lively and lovely. We had a mini chat about Doctor Who as well and she gave me a Tardis key ring and it absolutely made my day.

The last signing of the day for me was Emily Barr, the author of the thrilling The One Memory of Flora Banks. Emily is a very experienced thriller writer who mostly wrote for adults, Flora Banks is her first foray into YA. I very rarely read a thriller that I enjoy and so I was super excited to learn that Emily will be publishing her second YA in January. Unfortunately I missed Penguin’s call out for proof copies so I will wait until January!

And just before we headed home, I did some book shopping. Of course I did. I just cannot resist a 3 for £10 deal! The first stand I bought books from was Harper Collins where they were selling advance copies of Editing Emma by Chloe Seagar which comes out later this month. Chloe was there signing books too and she is absolutely lovely. I’ve heard some pre-publishing hype about her book and I can’t wait to get stuck in.

This is what I bought on day one of my YALC 2017 experience. What should I start reading first? Stay tuned for my post on what I got to on Sunday at YALC 2017 sometime this week.

Bonus photo for making it to the end of this post. Coppafeel was one of the charities situated on the YALC floor and they had this massive boob which, of course, I took a photo with.