Writer Polly Stenham has updated Strindberg’s classic play Miss Julie to London in 2018 in this bold yet minimalist production directed by Carrie Cracknell. Although this play is performed by three excellent British talent, at the core of it, I felt the play lacked depth within the modernisation, overall.

The play kicks off with Julie having a massive house party to celebrate her birthday. Downstairs in the kitchen cleaning up her mess, literally and metaphorically, is her friend Kristina and her fiancee Jean, who happens to be the Julie’s dad’s driver. The main scope of the play relies on the dynamic between these three characters. There’s a whole ensemble who play Julie’s house guests who remain nameless and don’t have any lines; indicating they aren’t that relevant to the story or Julie’s life. They’re just there for the free booze and drugs. At the start of the play, we meet Julie as she is dealing with a break up as well as still trying to process the loss of a parent. The evening takes a dark turn the more drunk and drugged up she becomes, truths start to spill.

Polly Strenham’s script isn’t bad but it did feel predictable at times. Although both Julie and Jean clearly have a history between then because the sexual tension was sky high, but the exploration of the power within the relationship, it was let down by being another case of a man taking advantage of a woman who is clearly not in a healthy state of mind. And yet he still tries to place the blame on her, reminding her what could potentially happen if her dad or Kristina found out about them, as if it doesn’t take two to tango. 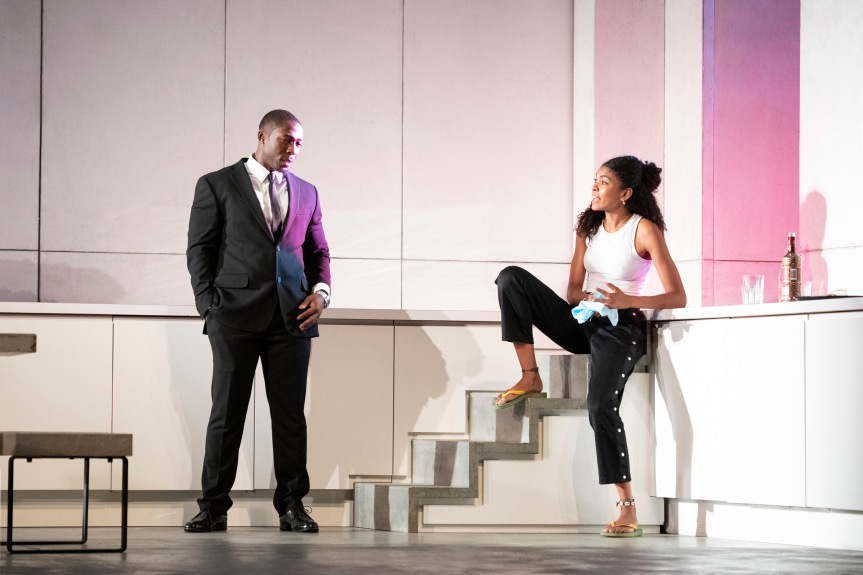 Fresh off a BAFTA win for The Crown, Vanessa Kirby stars as Julie. She is a truly amazing actress and shines so brightly in this production, and not just down to her sequinned jacket. She’s captivating to watch. Julie could be such a tough character to play because she isn’t very likeable but Kirby really grounds and humanizes her through the grief she is going through. She is supported by the excellent Eric Kohi Abrefa as Jean who conveys such nuanced sinister-ism throughout the piece, his character feels untrustworthy yet intriguing to watch. You don’t know what he’s planning to do next.  Thalissa Teixeria is also excellent as Kristina, who balances out Jean by being the more caring and friendliest of the pair.

I do have to say, although this production has three brilliant leads, the real star of the show is the unbelievably stunning set design by Tom Scutt. Paired with the lighting designed by Guy Hoare. The wide box like scope of the set made me feel, as an audience member, like I was looking through the window of Julie’s life. The dramatic end of the last scene creates such an intense atmosphere because of the stage and how it moves with Stuart Earl’s music booming in the auditorium. That’s all I’ll say on that to avoid spoilers ;).

Overall, Julie is a brilliantly designed and incredibly well acted piece. Carrie Cracknell’s production creates an intimate feel in the big Lyttleton auditorium but was a bit too predictable for me to enjoy the show fully.