Antic Disposition’s Much Ado About Nothing @ Gray’s Inn Hall*

After enjoying Antic Disposition’s production of Richard III last year, I couldn’t resist the chance to catch their latest production, Much Ado About Nothing. My only experience with the play was stumbling upon Joss Wheadon’s film adaptation on Netflix one night, so I was particularly looking forward to seeing this classic comedy on stage for the first time. Gray’s Inn Hall is the last stop on the tour having performed in cathedrals up and down the UK along with a run at the Perigord & Quercy in France. To accomodate both English and French audiences, this production is set in France and while majority of the scenes are spoken in Shakespeare’s English (by characters with French accents), some scenes are performed in French. The play follows two couples – Benedick & Beatrice whose friends & family are conspiring to get together – and Hero & Claudio, whose relationship is out to be destroyed.

The entire cast were excellent and they all gelled really well as an ensemble. But for me, the two stand outs were Nicholas Osmond and Chiraz Aich as Benedick and Beatrice. Osmond’s Benedick was very charming and entertaining to watch which made a good pair with Aich’s Beatrice. I really liked how strong willed and feisty she was as I felt they balanced each other out, while oozing with great chemistry between them. I also enjoyed Floriane Andersen’s performance as Hero who really captured the range of emotions Hero goes through excellently from joyous playful fun to heartbreak having been crushed by Claudio at their wedding.

One element of the production I really enjoyed was the physical comedy. Although at times, it could’ve been regarded as very slapstick but I found this only made the production even funnier. I also enjoyed the incorporation of live music which was performed excellently by a handful of the cast and injected with more life from Lucie Pankhurst’s great choreography. 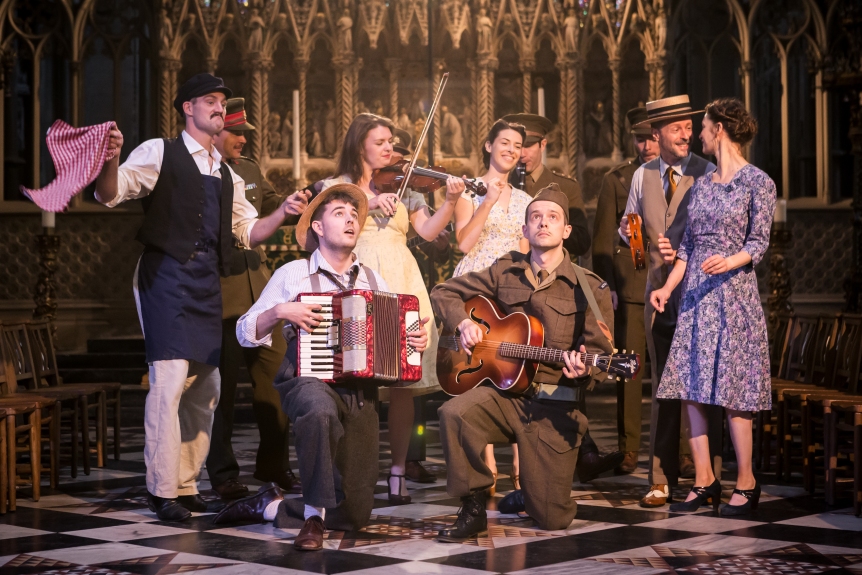 Overall, I found the production throroughly entertaining and accessible. Even though some of the scenes are performed in French, they were so well directed by co-directoed Ben Horslen and John Risebero, this made the whole production all that more accessible. And I am officially now a firm fan of the play itself and I plan to seek out more productions and interpretations of this play. Thanks Antic Disposition!