In the first revival of Joanna Murray-Smith’s play Honour, the play follows couple Honour and George whose 32 year marriage is sent into a spiral with the arrival of Claudia. The play is filled with two character conversations in which poses the questions, what is love? and what is passion?

The four actors do a marvellous job with what they’re given. The set design by Liz Cooke transforms the Park200 into a round space which heightens the intensity of the scenes and allows the performances to be more bare on the pale blue stage. Particularly from Katie Brayben’s very wonderful and driven performance as the very self assured Claudia who doesn’t bullshit when it comes down to who she is nor to her abilities as a journalist. Claudia’s a well written character and unintentionally allows Katie Brayben’s performance to soar over everyone else’s. Imogen Stubbs’ performance as Honor is very strong and I found her arc to be interesting indeed. Stubb’s delivers the devastation and heartbreak that comes with giving everything up for a man who is so willing to walk away from you. Henry Goodman’s performance as George is subtle and is also strong, but it was hard to root for a character that was so selfish. There’s also a fantastic performance from Natalie Simpson as Honor and George’s daughter Sophie and I found it interesting to include her perspective. 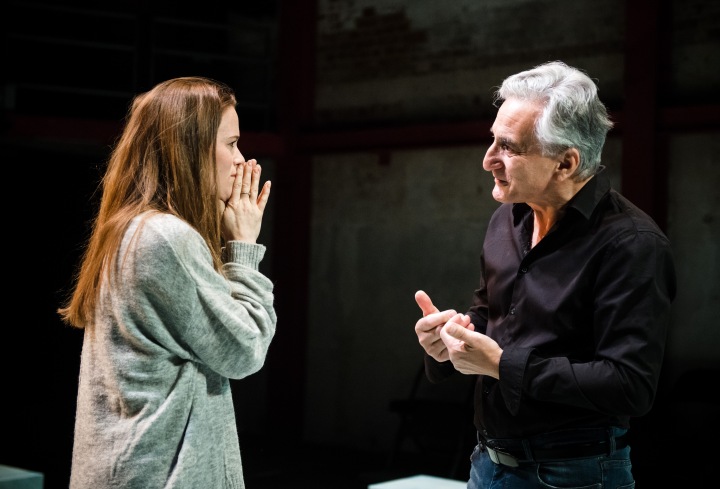 But overall, it was a play that lacked depth. The whole play takes place over a week and although the play constantly talks about PASSION and how one must feel so much PASSION!! But this production has none of it and it makes the whole play drone on and on. Fab performances, fab set, ultimately poses interesting questions but takes forever to get to the point.