We’re Staying Right Here follows a stand up comic called Matt who, at the start of the play, has it all going for him. He’s just become a dad, his stand up career is starting to take off. As the pressure becomes unbearable, Matt finds himself trapped in his flat with two companions who constantly tear him down and has to fight his way out of it.

Firstly, this was a truly sensational play. It’s hard enough to find a play that tackles mental health issues firsthand but it’s even rarer to find a play that discusses men’s mental health in particular. With men in the UK three times more likely to take their own lives than women (source), why aren’t these stories being told? I really hope this play acts as a catalyst for more stories like this to be told. Henry Devas writing in this play is frank, hard hitting yet manages to be lighthearted at the same time. 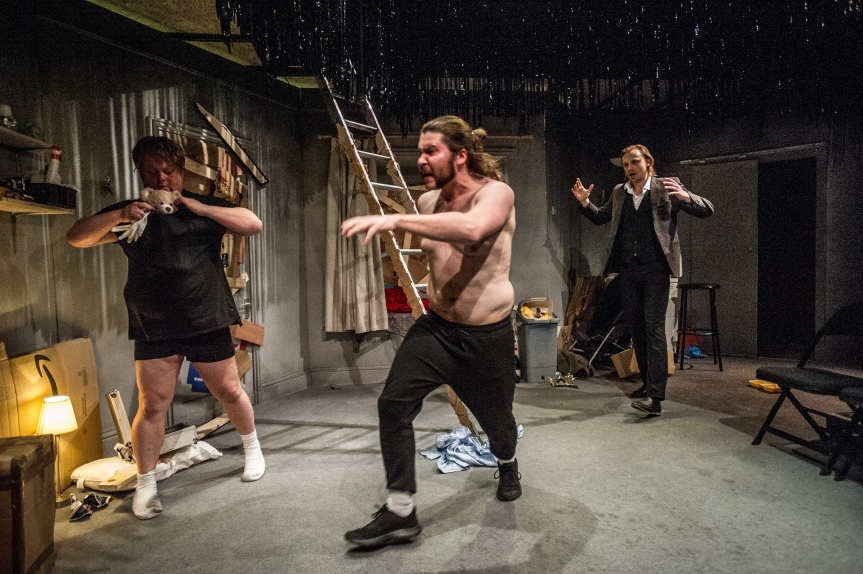 The four piece cast are fantastic with Danny Kirrane leading as Matt in a brilliant and heartbreaking performance. He hits every right note in the delivery of the stand up scenes but can also make you cry with empathy in the darker scenes. There’s also fantastic support from Tom Canton and Daniel Portman as Matt’s companions Tristabel and Benzies who switch between comedic and attacking so seamlessly. I really liked the positioning of these characters because they felt more like the personification of the voices in Matt’s head. Although I do wish the audience knew where they stemmed from. Liam Smith is also brilliant in his duel roles as the two Chris’.

This play is really one not to miss. Although some of the material in this play may be hard to listen to, so do enter at your own risk. But if you can, definitely go and see it.