Once On This Island @ Southwark Playhouse*

Once On This Island tells the story of a peasant orphan girl named Ti Moune and Daniel, the rich city boy she saves from death. Although the Gods of the island have different plans for her, Ti Moune is destined to prove where her destiny lies. With calypso inspired music by Stephen Flaherty and lyrics by Lynn Ahrens, the second production in the British Theatre Academy’s summer takeover is one not to be missed. 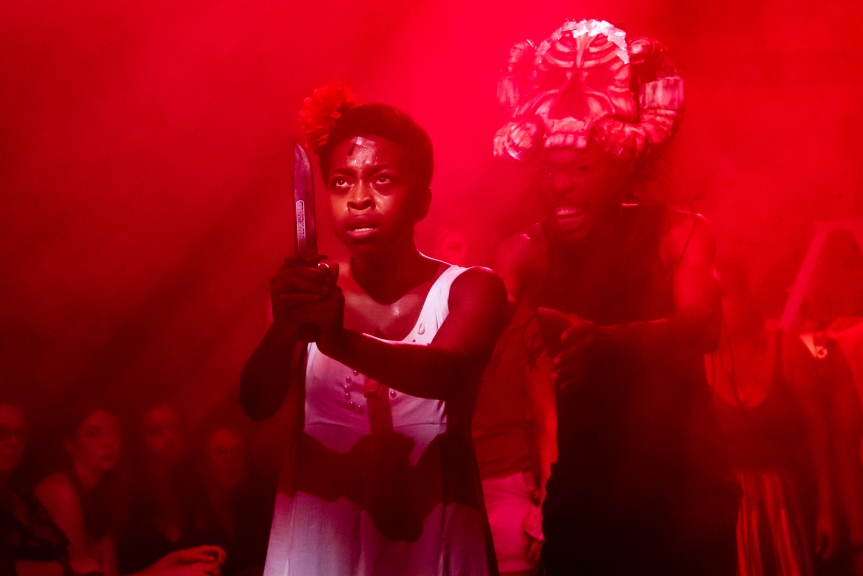 The atmosphere in director Lee Proud’s vibrant and beautiful production hits you as soon as you walk into the auditorium, with the actors constantly engaging with the audience (to the point of some very excellent bamboo trade going on). Simon Wells’ traverse stage works well here with stunning designs on the floor of the auditorium and allows Lee Proud’s  already incredibly excellent choreography to flourish even further.

The incredible cast work together as an ensemble like a beating heart. Playing Ti Moune is Chrissie Bhima, who truly has a glistening career ahead of her. Her performance is stunning and her rendition of Waiting For Life almost stopped the show with it’s thunderous applause. The same goes for Jonathan Chen, whose rendition of Mama Will Provide as the Earth Mother Asaka also almost brought the house down.

This is a truly wonderful production, much in the same vein as last year’s production of Bring It On. An exciting musical with a pre-existing fanbase due to recent runs on Broadway is rewritten by a very talented cast of up and comers. Definitely not one to miss.