The last show in their summer season, the British Theatre Academy are finishing with Pasek and Paul’s musical Dogfight. The show follows the relationship between Eddie, a marine on a brief leave to San Francisco from the war, and Rose, a girl he meets in the diner she works at. Once Eddie invites Rose to attend a “dogfight” with his fellow marines, where they have a competition between them to see who can bring the most awful date. Whoever wins gets prize money.

At the heart of Dogfight are the two excellent central performances from Stephen Lewis-Johnston as Eddie, who was particularly stunning in his final number Come Back, and Claire Keenan whose performance is laced with characteristics that makes the character feel relatable as well as having an impeccable voice to match. The two leads have wonderful chemistry together and really bring the relationship between Eddie and Rose to life with such ease. 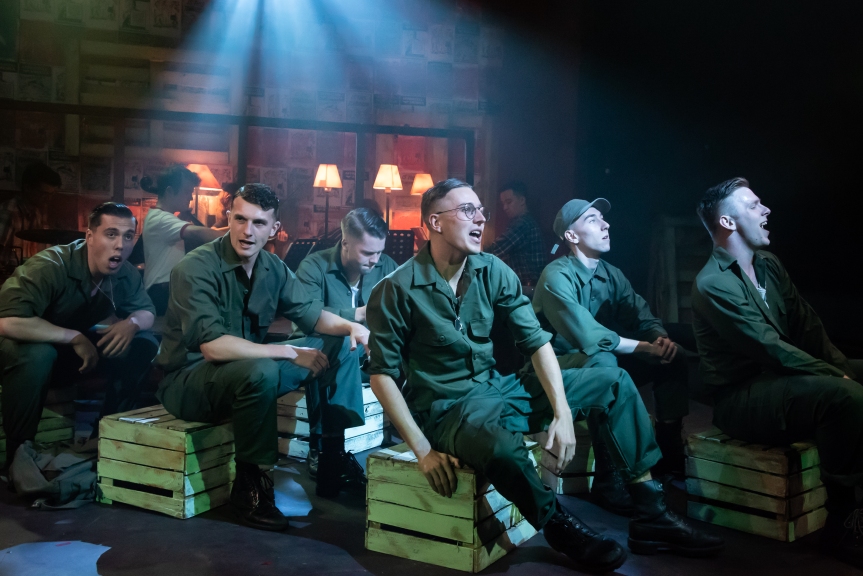 The show being performed without an interval and in the Little space of the Southwark Playhouse allows the show to play very intimately, and allows all the nuances in the cast’s performance to shine. The entire ensemble do a wonderful job, although despite the small stage feeling overpopulated at times, but I have to say Charlotte Coles was outstanding as Marcy. What this show does particularly well is that it doesn’t shy away from proposing the possibility that those who are put on a pedestal as heroes, may not necessarily be. Dogfight does go to some dark places but I think it does well in balancing this out with the amount of heart that is presented in the show.

Dogfight is an underrated gem of a musical with that classic Pasek and Paul touch that made Dear Evan Hansen and The Greatest Showman huge commercial successes. It also feels a bit like a homecoming since the UK premiere of the show took place at the Southwark Playhouse a few years back. And as a bonus, you get to watch a fantastic cast who have great careers ahead of them.