Right off the bat, I must stress, I have not seen the film this musical is based on. Anytime I mentioned this show to anyone, I was asked whether if I had watched the film or not. I understand there is a massive trend in movies being made into musicals and there are a few that I still adore even without knowing the film all too well beforehand. This is not one of them. Much like the ethnicity of it’s entire adult cast, Big is a very vanilla musical.

The premise of this is a 12 year old boy called Josh makes a wish to a fortune teller that he wishes to be a grown up. In his sudden burst of adulthood, Josh finds himself working for a toy company to help them construct their new toy in time for Christmas. Along the way he meets Susan (Kimberley Walsh), a fellow executive at the toy company, and they develop a romantic relationship. Because. You know. That’s not weird at all what with him actually being a child underneath the facade. He also meets another executive at the company called Paul who is pissed off that Josh ‘took’ Susan from him (because women are prizes after all!) and sets out to destroy him…. for about the last twenty minutes of act 1 because he seems to be never seen again in act 2. 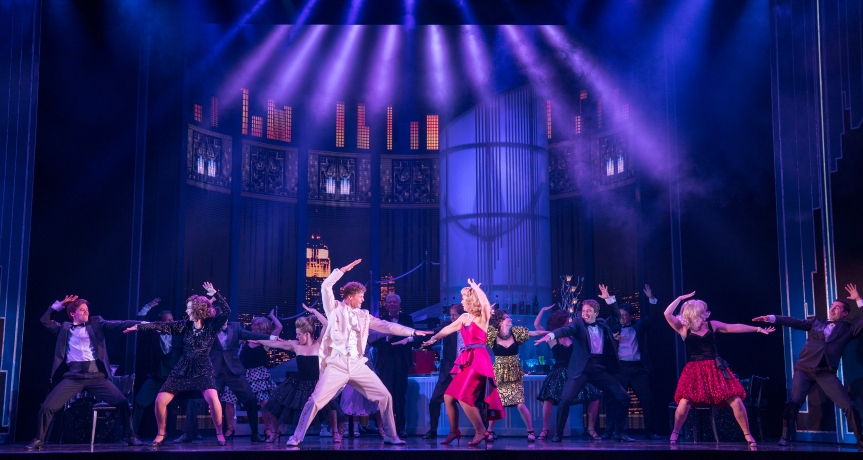 Big The Musical performed at the Dominion Theatre Jay McGuiness as Josh, Kimberley Walsh as Susan

The saving graces in this production are Simon Higlett’s production design along with Ian William Galloway’s video design, which really emphasised the Big metaphor running throughout the show. Although I have to admit that the scene where Josh and the owner of the toy company are dancing on the massive piano went on for far too long and it really bugged me when some of the projections weren’t in time with the performance happening on stage.  And the performances aren’t awful either. Jay McGuiness lacks the childish charm at times but he makes up for it in his choreography delivery showing he’s still got it from his Strictly days. For me though, Wendi Peters was excellent as Josh’s mum and to be honest, she wasn’t in the show enough. And a scene stealing performance from Jobe Hart who played Billy, Josh’s best friend, was a joy to watch.

Big The Musical performed at the Dominion Theatre Jay McGuiness as Josh,

But for me, I sat through the whole thing with feeling weird and creeped out. Not only was the whole romantic plot absolutely creepy to watch be presented so casually. Obviously the rest of the characters don’t know he’s a child but it is so weird when you do know he is. There was also too many casual instances of innuendo (Jay McGuiness’ first scene? He strips down to his underwear. Have I not mentioned enough already that THIS IS A CHARACTER THAT IS MEANT TO BE A CHILD UNDERNEATH THE FACADE. WE CANNOT SEXUALISE THIS.) And the character of Susan was treated poorly as well with a few casually sexist remarks thrown about just because the people she’s gone out with happened to have worked at the same company too. It also doesn’t help that the entire score isn’t anything to shout about either (although I do love me an overture) with it’s lack of originality. (There’s a whole song about how Josh takes his coffee black now that he’s an adult. I literally, could not give less of a shit. Move on with the story).

Had it been a story about how a child makes his way up the ranks of a toy company using his youthfulness, then maybe I would’ve enjoyed it more. But inject a creepy love story into the show and it just becomes a plain and weird experience. Was I taking it too seriously? Probably. Look, I pride myself on being honest in my reviews but I don’t do it so cold heartedly. I know every person involved in that production puts 125% of their heart and soul into their work. I just wish the producers were a bit more wise with what it is they are actually putting on.