Five Convention Season Tips If You’re a Noob like Me.

Last weekend, I went to my first convention outside of London! Jen, Abbie, Jess and I attended the Telford Fanzone at the Telford International Centre in, you guessed it, Telford. I’ve previously attended MCM London Comic Con at the Excel Centre, which wasn’t for me due to the excessive amount of people. I’ve also attended London Film and Comic Con for the Young Adult Literature Convention, which I enjoyed a lot more because it was spacious and more tailored to what I was into.

TFZ was SO relaxed and spacious, I had the best time. Not only hanging out with some awesome people but getting to meet some of the amazing guests! Having been a fan of Jeremy Jordan (Supergirl, Smash, Newsies, my all time favourite concert) for 5-6 years now, it made me so happy that he was just as wonderful as everyone says! I also got to meet Rahul Kohli and Rose McIver from iZombie who were so, so lovely!

I wanted to document a little bit about my experience but I’m also here to offer some tips if you’re a con newbie like me, as con season is creeping upon us.

The most important one of all, in my opinion. Just because you have paid x amounts of money to meet so-and-so doesn’t mean they aren’t human and may not be comfortable at times! I was a bit weary asking Jeremy Jordan for a cuddle photo and a Bonnie & Clyde type photo but luckily he was more than okay with it! 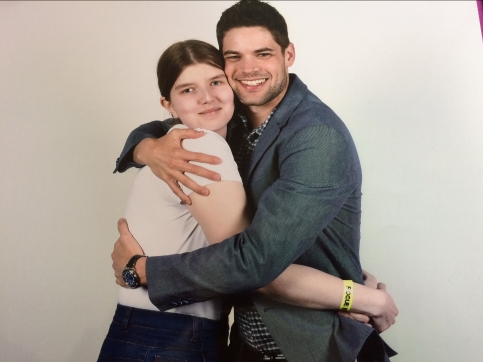 When purchasing autograph/photo tickets at TFZ it was all cash only. I had already preordered my two photos with Jeremy but planned to buy a photo ticket with Rahul as well as the Supergirl trio (when Chyler Leigh was still going). The website should have a price list so you’ll know how much to bring. However, what with Chyler cancelling, that meant I could meet Rose McIver, get Rahul’s autograph AND still have money to put back into my bank account!

I didn’t bode well with this one. I wore my favourite shoes and, even though they had new insoles in them, my feet were still slightly burning by the time I got back to London. I always underestimate how much queuing is involved at cons – from picking up tickets to waiting for photo ops.

Especially with summer approaching. At TFZ they had a food counter, which was great. There was also the added extra of the convention centre being opposite a small centre of food places. It is always best to allow room in your schedule for food related pit stops. Speaking of schedules…

TFZ uploaded their schedule the day before the con, which helped us out big time. As well as preparing to meet the guests you want to meet, you’ll also know where your mates are when you need them. As a side note, it is always best to have the events Twitter accounts on notifications for live updates like calling for photo ops and last minute schedule changes.

I hope some of these tips were useful! When this has gone live, events like MCM Comic Con London & Heroes and Villains Fan Fest London will be ending. But there’s still plenty more exciting conventions happening from Rogue Events, Starfury and Showmasters. If you’re attending a con, I hope you have a wonderful, safe and exciting time.

Also major props/thanks to Jen (for driving us and for pizza and for letting me crash at hers the night before!), Abbie and Jess for such a fun day! And to the cosplayers who really excelled in their costumes!