Last week, I was kindly invited to review three shows at three off West End theatres that I hadn’t visited before. I’m always up for finding new theatres to visit, particularly theatres that specialise in new writing and giving a platform to plays that haven’t been performed on UK soil. 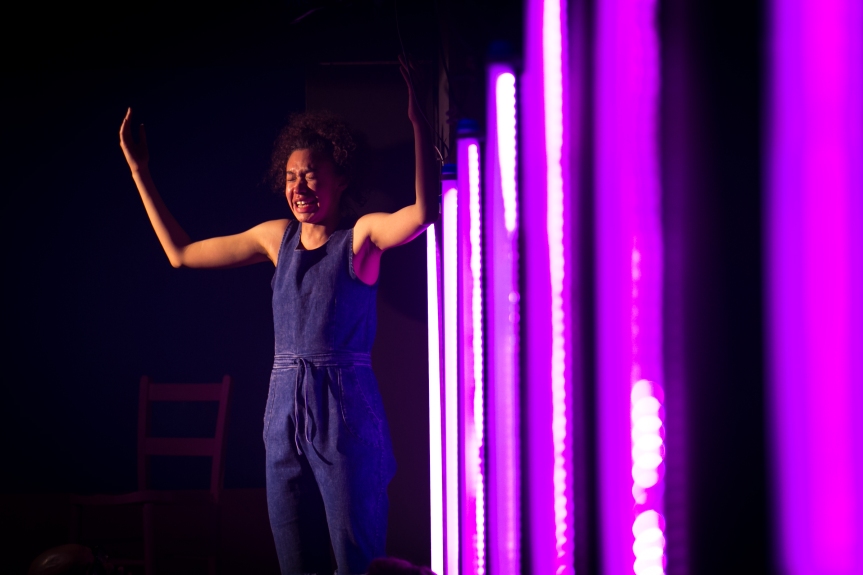 Nina Bowers soars in this gripping play about events that took place in 1992, the play could easily have been set in 2017. After the death of a young black taxi driver named Rodney King, riots broke out after the policemen who assaulted him were acquitted the playwright Anna Deavere Smith interviewed people about what happened, the consequences afterwards and uses their words to create this play. Nina Bowers tackles all 20 roles in a truly sensational performance down to her body language and accents. The direction by Ola Ince makes the piece feel inclusive. As well as using as much of the space as possible without sitting on the audience, there is an actual ten minute tea/coffee break in the show. Seriously. Nina Bowers actually comes round with a plate of party rings and pink wafers to offer. Twilight: Los Angeles, 1992 is a truly special, unique take on police brutality and racial oppression within the justice system in America and it is ever so prominent in 2018.

This is a bit of a fib, as I have been to Shoreditch Town Hall for concerts (including Lea Michele but I’ve never seen a theatre piece hosted there. Upstairs, in one of the large common rooms is where The Claim is residing. At a 90 minute length, Tim Cowbury’s play tackles migration and the prejudice surrounding it. When Surge enters the room, he is grilled by two unnamed hosts about why he came to London. More specifically, Streatham. While it is has a slow start, the last third of the play is so compelling due to its relevancy. Particularly in a time that is enhanced due to Brexit, when asylum seekers are being made to look like the enemy. It is a very gripping play with some brilliant performances, particularly from Ncuti Gatwa who brings such innocence and emotional depth to his excellent performance.

Going into this, I had no idea what to expect. I have very limited knowledge of art and the art world, but the name Peggy Guggenheim was familiar to me. Turns out, her uncle founded the famous New York museum; something I did end up learning from this play.

Judy Rosenblatt stars as Peggy Guggenheim in Lanie Robertson’s one woman play. Rosenblatt does deliver a brilliant and engaging performance, but it is the plot that lets this play down. At the start of the play, the audience sees Peggy preparing for an interview on Italian television. She is then explaining to the audience about where she got her outfits from, who gave them to her and giving some insight into her past. And I liked this because it was inclusive of the audience and felt as if we were part of the action.

But, that scene only goes on for about 30 minutes. The rest of the 90 minute show feels like it’s all just filler. There is a section towards the end that focuses on the relationship between Peggy and her daughter Pegeen as Pegeen prepared to debut her art collection.  But I felt it was just so flat. I think I would’ve preferred if the play was about the relationship between them, so we would have the two perspectives. It would’ve been a much more interesting approach and more insight into what eventually led to a tragedy (no spoilers here!).

As I mentioned earlier, Judy Rosenblatt’s performance is worth the watch. But I wish there was more substance.

What have you seen at the theatre lately?