I have to say right off the bat that I did ultimately enjoy it. But I have to admit, there were still a few flaws in the show that really bugged me. Firstly, the entire plot line took absolutely ages to set up. Nothing really happens until the finale of act 1. I get that, with an ensemble cast like this, there are a lot of characters to set up. But the character development and introduction gets pushed aside in favour of glitzy show stoppers that don’t really add much to the story. And because of that, it’s a bit hard to root for Robbie when there’s nothing there that makes me want to invest in him finding his happily ever after for a good hour of the show. That said, Luke Bayer absolutely shines as Robbie and I’m glad he’s stepping into the spotlight after adoring his performance in Fiver.

Alongside him in co-billing is Millie O’Connell, fresh off her Olivier nominated turn in Six, as Robbie’s best friend Velcro. Millie O’Connell is really great in this, acting as Robbie’s sort of fairy godmother. But I would argue she is severely underused in this and I don’t believe she would’ve been given co-billing had she not have Six on her CV. She gives an excellent performance with what she’s got to work with, her chemistry with Luke is lovely and her vocals are on top form. But I wish we saw more of her character develop instead of a random filler moments like with a whole song about how she can’t work out whether which boys are gay or straight anymore. She’s a brilliant performer, showcase her more.

There was also a lot of instances where the jokes absolutely did not land at all. I’m not sure if it was due to the crowd, or the nerves of the performers, or how it was directed. At times some well written jokes were set up but the punchline followed a lot later than it should’ve done. By the time the audience realise what the line was, the moment has passed. 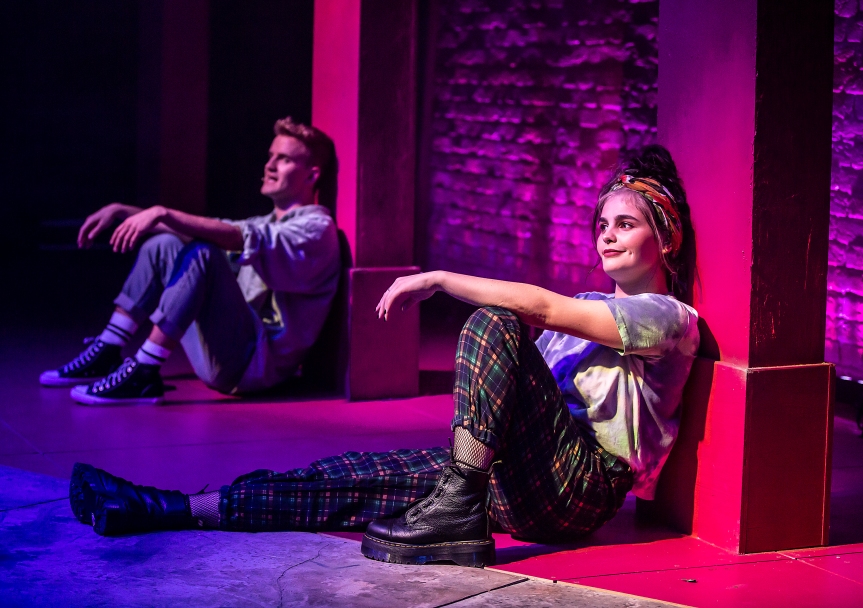 I’ve been quite nit pickity but I have to stress, I did ultimately enjoy the show. Stiles and Drewe’s score is upbeat and buzzes with a similar vibe to Soho on a Friday night. The act one finale You Shall Go To The Ball is a stand out from the score. The supporting cast are on top form as well. Michaela Stern and Natalie Harman are absolutely hilarious as Robbie’s awful step sisters whose diva like attitudes puts Gemma Collins to shame. Tori Hargreaves’ beautiful voice shines as Marilyn and gives a lot of depth to her performance. Ewan Gilles is also a stand out with a huge commanding stage presence as William George, James’ campaign manager. His song The Tail That Wags The Dog was an excellent showcase of a character’s arc reaching a turning point which some of the other characters were missing.

But, do you know what? Despite it’s flaws and how much these little things bugged me. I actually had a really great time. I believe that we can absolutely challenge theatre and I do have to be honest in these reviews. Everything I’ve said here is exactly what I said to my friend Sabrina this morning. However, I go to the theatre for escapism and this is what I got from this show. It’s pure, delightful fun that oozes buckets of energy and it makes you feel good when you leave. What more can you want? At least it doesn’t make you feel uncomfortable like some shows. So yes, I would still wholeheartedly recommend Soho Cinders for if you’re looking for a fun, pop-infused show with a stellar cast.