It’s been well over two weeks since London Pride and as a born and bred Londoner, I’m always so proud when the city comes together to celebrate people being comfortable and free within themselves. Unfortunately I didn’t get to attend the annual parade, but I did get to attend one of the readings (thanks to Olivia) at the National Theatre as part of their Queer Theatre season. The reading was of a play called Certain Young Men written by Peter Gill that follows four same sex male couples and how they experience being in the gay community. It was a play I had never heard of before until Olivia texted me that Jonathan Bailey was in it. And it got me thinking about other stage shows that feature protagonists that identify as part of the LGBTQ+ community.

Angels in America by Tony Kushner

Angels in America is Tony Kushner’s epic play in two parts labelled as a “gay fantasia on national themes.” The play focuses on a group of eight New Yorkers and how the gay community affects them. The main protagonist in the play is Prior Walter, a 30 year old gay men who is diagnosed with Aids at the beginning. As well as struggling with his diagnosis, his boyfriend Louis leaves Prior at his absolute worst. I’ve managed to see the full production at the National Theatre twice and it is truly a magnificent play. Marianne Elliott has directed a beautiful, moving and abstract play with an incredible ensemble with the likes of Andrew Garfield, Nathan Lane, Russell Tovey and Denise Gough. The play is being broadcasted in two parts through NT Live with Part One: Millennium Approaches being broadcast on the 20th July and Part Two: Perestroika being broadcast on the 27th July. Alternatively, you could always refresh the National Theatre page for return tickets.

Taylor Mac’s play Hir bends the rules of a typical family drama. When Isaac Connor comes home after being dishonourably discharged from the marines, he finds his sister Maxine is now his transitioning non binary sibling Max. Their mother Paige has disregarded all ties with the patriarchy including taking care of her husband Arnie. Hir is making it’s UK debut at the Bush Theatre until July 22nd and for extra reading you can read my review here. Alternatively if you can’t make it to the Bush, you can buy the play text from Oberon Books.

Our Ladies of Perpetual Succour by Lee Hall

The 2017 Olivier Award winner for Best New Comedy has finally made its way onto the West End after touring for many years, including pit stops to National Theatre of Scotland and The National Theatre, London. The show follows six Scottish schoolgirls as they head to Edinburgh for a night of mayhem before a choir competition. Lee Hall’s stage adaptation of Alan Warner’s book The Sopranos only has a running of time of 1hr 45 minutes, so we don’t really get to spend a whole lot of time with the characters. One of the girls, Finnoula’s arc in the play is that she’s coming to terms with her sexuality. She explicitly states that she thinks she likes girls just as much as she likes boys. There’s very little bisexual representation in all media, let alone on stage. It’s a small part of the play but I think the impact it has on audience members is even greater. You can read my review of the show here. 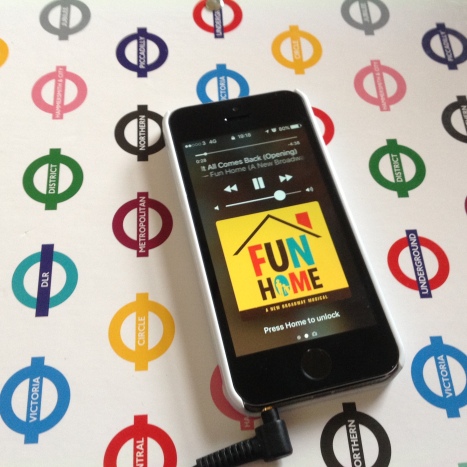 Fun Home is the Tony Award winning 2015 Best New Musical based on Alison Bechdel’s graphic memoir of the same title. Fun Home is the first musical on Broadway to feature a lesbian protagonist. The show cross cuts through various stages of Alison’s life from her relationship with her father, who killed himself because he was gay and had affairs with his male students, to her coming out while at college. This is the only show on the list which I have yet to see. Jeanine Tesori & Lisa Kron’s adaptation is making a trip across the pond and will debut at the Young Vic from June 2018. I am so unbelievably excited to finally see the show. You can bet this will be a repeat of The Last Five Years in which I go time and time again. For more information on the London premiere of the show, visit https://www.youngvic.org/whats-on/fun-home

Jon Brittain’s plat Rotterdam opens with Alice, who is about to send her parents an email just before the New Year to tell them she is a lesbian and has been seeing Fiona for 7 years. Just before she hits send, her girlfriend Fiona tells Alice that she is transgender and wants to start living as a man. I’ve never seen a stage show with a transgender protagonist before and I think it’s a good thing transgender people are starting to get the representation. In the back of the programme there was plenty of resources that can help reduce problematic language when talking to someone who is transgender as well as charities that help reduce bad LGBT* representation in the media. It’s truly a remarkable play that, deservedly, has had plenty of life into it with 3 runs in London and a run in New York.

Do you have a favourite show that’s LGBT* focused?